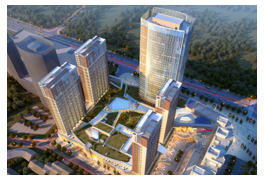 KONE Corporation, one of the global leaders in the elevator and escalator industry, has won an order to deliver 111 elevators to the Nanjing Kingfine Center, an office and residential development set in the burgeoning neighborhood along Baiji Lake in Nanjing, China. Among the elevator units, KONE will provide 28 KONE MiniSpace(TM) and 23 KONE MonoSpace® elevators. In addition, KONE will supply 60 KONE TravelMaster(TM) escalators for the project which is set to be completed in early 2017.
The Nanjing Kingfine Center will consist of one 168-meter office building, four residential towers and one commercial podium. Set to be located near the Baijia Lake area, the project will be constructed at the interchange of Nanjing's upcoming metro lines 1 and 3, which already includes two malls and has been fast developing into one of China's most buzzing and picturesque areas.
"KONE's good reputation as a reliable partner played a critical role in the selection process for this order," says William B. Johnson, Executive Vice President for KONE Greater China. "We are very happy to be involved in this great project and look forward to starting the supply of our solutions for the different towers and buildings inside the Nanjing Kingfine complex."
The order was booked in the fourth quarter of 2015.
Previous press releases on KONE's orders are available at www.kone.com/press, including:
October 14, 2015: KONE wins an order for Tianjin Luneng Lvyinli, a mixed development project in China
October 6, 2015: KONE wins impressive order for Nanjing Qing Ao Center Tower 2
July 3, 2015: KONE to equip Hangzhou's Ping An Financial Center in Zhejiang Province, China
For further information, please contact:
Liisa Kivelä, Director, Communications, KONE Corporation, tel. +358 204 75 4330. media@kone.com
About KONE
KONE is one of the global leaders in the elevator and escalator industry. KONE's objective is to offer the best People Flow® experience by developing and delivering solutions that enable people to move smoothly, safely, comfortably and without waiting in buildings in an increasingly urbanizing environment. KONE provides industry-leading elevators, escalators, automatic building doors and integrated solutions to enhance the People Flow in and between buildings. KONE's services cover the entire lifetime of a building, from the design phase to maintenance, repairs and modernization solutions. In 2014, KONE had annual net sales of EUR 7.3 billion and at the end of the year over 47,000 employees. KONE class B shares are listed on the NASDAQ OMX Helsinki Ltd in Finland.
www.kone.com