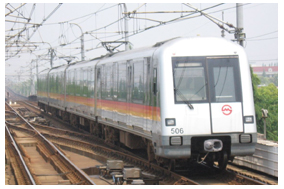 KONE, a global leader in the elevator and escalator industry, will equip the nine new stations along the southern extension of Shanghai Metro Line 5 in China's biggest city. The order includes 69 KONE TransitMaster(TM) escalators and 24 KONE MonoSpace® elevators.

The Shanghai Metro opened in 1993 and has expanded rapidly with some nine million people now traveling on its 14 lines every day. Line 5 was opened in 2003 and its existing stations are all above ground. In the new southern extension, four of the nine new stations will be underground.

"We are very excited to be involved in this expansion of the Shanghai Metro, one of the busiest rapid rail networks in the world," said William B. Johnson, Executive Vice President for KONE Greater China. "We are proud to offer our people flow solutions to help smoothen the journey for Shanghai's commuters."

KONE has previously provided elevators and escalators to six stations in the extension of Shanghai Metro Line 3.

The developer of the project, estimated to be completed by the end of 2017, is Shanghai Rail Transit Line Five South Extension Development Co., Ltd.

The order was booked in the first quarter of 2016.

About KONE
KONE is one of the global leaders in the elevator and escalator industry. KONE's objective is to offer the best People Flow® experience by developing and delivering solutions that enable people to move smoothly, safely, comfortably and without waiting in buildings in an increasingly urbanizing environment. KONE provides industry-leading elevators, escalators, automatic building doors and integrated solutions to enhance the People Flow in and between buildings. KONE's services cover the entire lifetime of a building, from the design phase to maintenance, repairs and modernization solutions. In 2015, KONE had annual net sales of EUR 8.6 billion, and at the end of the year close to 50,000 employees. KONE class B shares are listed on the Nasdaq Helsinki Ltd. in Finland.
www.kone.com